I first heard the word Malapai when riding a train going east across New Mexico in the late 80s.  On that stretch of the route, an “old west” interpreter was employed to narrate the landscape. He mentioned that the ground surface in many places was wind eroded and stony, “hard on the feet”.  He could have been describing a stroll along the sidewalks in Tainan, Taiwan, where I spent the last 10 of my 39 years in that nation. 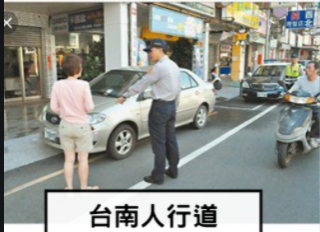 Tainan is an old city. In many places the roads follow the landforms which determined ownership centuries ago. Strangely angled corners, narrow streets  and storefronts at several different levels, depending on when things were erected, are quite normal. Tainan can be a difficult place to navigate on foot.

Where we live now is quite different. Streets are wide, traffic is light, and there are sidewalks everywhere. Older sidewalks have been made rough by the abundant trees along the streets, the roots of which have raised portions here and there. But if one is moderately aware of the surface, there’s no real problem. Our own block was rebuilt in 2019,, so the sidewalks are flat and clean.  Streetside trees were newly planted at the end of the project. Ours, emplaced early in the spring, looked like a dead thing at first. Now it is covered with attractive white blossoms.  We’ve seen several similar trees in the neighborhood, all of which look beautiful in April.

We mentioned this to our daughter, who lives in a different part of the country. She said, “I hope it’s not one of those bad smelling ones.” It took a little reflection, but then we recalled. Some beautiful trees with white blossoms that grace the sides of a street that was rebuilt about ten years back. One day when strolling in that neighborhood we noticed  a strong reek. Upon exploration, it was discovered coming from the blossoms.

We walked over there recently. The trees were in full flower and maximum aromatic power. We broke off a small twig with blossoms and leaves to carry home. Comparing what’s in front of our house to what was in hand, we discovered what could be bad news in the future.

Beauty, it is said, has its costs. The Malapai land in America’s southwest has its own special kind of beauty, but you don’t want to walk there. Tainan is rich in culture and history, but it’s better to get around by taxi. Our new tree is a wonder to behold, but we may want to keep our distance during certain times of the year.