During the last 4 or 5 years that we lived in Tainan, my wife persuaded me to take up walking for exercise. Our residence was near to a local elementary school, the gates of which were permanently open, and the athletic field of which was generally unoccupied before 7AM and after 6PM.  On most days, we’d walk several laps around the track either morning or evening, and sometimes even both. Walking laps is mind-numbingly simple. 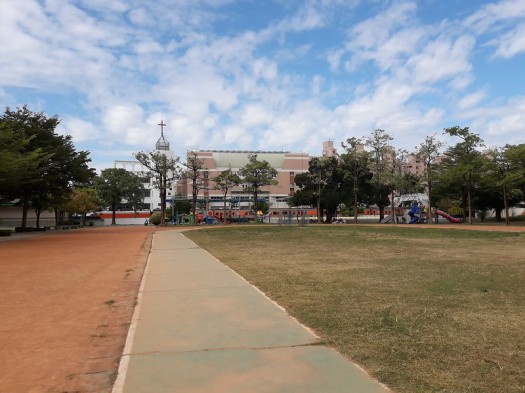 Where we live now, in Michigan, there’s not a school with an open track nearby, but that’s not really a problem, because unlike Tainan, the streets are motor-scooter free and the sidewalks are actually flat. We enjoy pleasant walks around the neighborhood. During the winter, that’s not always possible, because though the sidewalks are flat, they are icy. Besides, it’s just too cottin pickin’ cold out there.  In recent weeks, though, we’ve found outdoor walks to be a necessary relief from being cooped up, social-distancing indoors. This being an American city, we encounter more SUVs than pedestrians while out.

We began something different a few days ago. Instead of getting out the front door and asking ourselves about a directional vector (East, West, South or North) we’ve begun walking the grid in our neighborhood, starting at a corner of one of the north-south avenues and walking west several blocks to another one, then going a block over, and heading back east. We’re still near home, but are discovering blocks we’ve not walkde before and delightful vistas that were yet unseen by us.

Tainan could have been like that, except… streets curved, sidewalks stepped up and down, and there were motor scooters buzzing everywhere.

But still, there was NEVER ice.