I’m old enough to remember many kinds of wars that have been waged. My elder brother and I both participated in a shooting war in Vietnam, other young Americans have been part of shooting wars waged over petroleum in the Arabian gulf. As I write on January 7th, the American president is ordering heinous things to be done to the people of Iran, and has even suggested that he has ordered certain culturally important locations to be pre-targeted in a way that, should the attacks actually be carried out, would be war crimes.

But these aren’t the kind of wars that I reflected on when arriving in Tainan, Taiwan this morning. After a 4 hour bus ride IN America, a 14 hour flight FROM America and a further 90 minutes on the high speed train in TAIWAN, we boarded a taxi for the city center. Within 500 meters of leaving the freeway we were confronted with a billboard proclaiming a war going on in town.  We were bemused.

When I was a child growing up in Los Angeles, there were occasional “gas wars”, which were market manipulation schemes by which gasoline producers and distributors with deep pockets were able to sell below cost until their “shallow pocketed” competitors were driven out of business.  The last one of these I recall was in 1972, when I had just left the US Army and found a retail services job in the San Fernando Valley. I fondly recalled those prices after the 1974 Yom-Kippur War and the escalation of petroleum product prices that followed it. 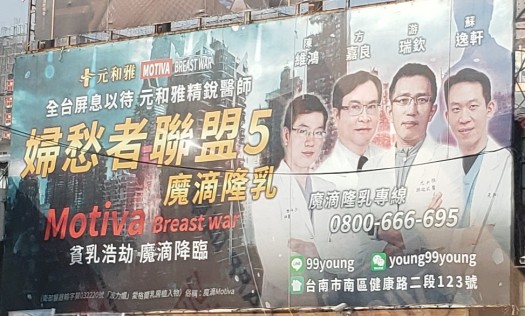 Upon arriving in Tainan today we were confronted with evidence of price-cutting competition between plastic surgery group practices. These clinics provide the standard things one would expect: eye lifts, face lifts, liposuction, etc. Currently they have declared a “Breast War”.

I recall that particular billboard from the years before we retired and moved away from Taiwan. It often carried rather lurid adverts for the breast enhancement services of the clinic which regularly rents it. Never before, though, had it declared war.