Sarah Kay, the spoken word poet, was an example I used when teaching “stage presence” to ministerial candidates in Taiwan a few years ago. After that course I “filed her away” until a short article about her appeared in The New Yorker last May.  She is a master of her art. 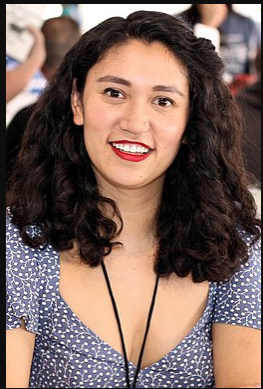 Last nightI listened to a speech she gave at an event in 2015. In her 50-minute address she took breaks to perform poems illustrating the points she made. Her oratorical style differs between performance and speaking, that’s to be expected, but her animation and patterns of speech in the lectern are heavily influenced by her poetic style.  I wish that more of the thousands of sermons, lectures and speeches I’ve heard since I began to attempt to listen had more of her presence. Even more, I wish that I’d had some of it in the hundreds of sermons and lectures I’ve delivered. There was no poetry in me, either.

If there’s a hell, my torment there can be no worse than to have to watch all the lessons sermons and speeches I’ve delivered on an endless loop of video tape. If there’s a heaven, part of its joy will be the good news that the burdens of my poor and misguided public pronouncements have been rolled away.

Ms. Kay also observed a difference that’s become apparent of late, a difference that I hadn’t been able to articulate. I’m rewriting some devotional poems by a high school classmate whom I met for the first time at a reunion last August. Her collection was privately published four years ago.  As I turn her verses into song and set them to tunes, I sometimes wonder if it’s worth the trouble. Ms. Kay mentioned that early in her own transition to poet, she discovered that lots of her original work was “journal poetry”, not meant for publication. I think that my classmate failed to make that distinction. She gathered pieces that were meaningful to her; heartfelt, passionate, and revelatory; which likely should have stayed in the journals.

The “deal” between us is that I may set her work to tunes and share the results with her alone.  Since the style of music her church is different from the tunes I find in the public domain, publication, distribution and use are highly unlikely, anyway. Nonetheless, I find it to be an interesting project, and the skills I’m developing have their uses elsewhere.

As for those old sermons of mine, I’m coming to see them as “journal stuff”. I’m glad that none of them got printed, precious few made it to video, and those which remain on discs, hard-drives and in the cloud can be deleted.