The pictures from Hong Kong are terrifying. Everything from police chasing down and beating people on the streets, in tube stations and shopping centers to random firing of tear gas grenades from moving vehicles into crowds. The pictures of this past weekend’s use of water cannons on university students dragged me 31 years back in time. 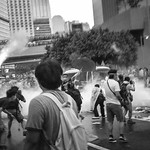 In 1988, after the post-WW2 martial law period of Taiwan’s history came to an end, numerous grievances were aired by all manner of civil groups. Farmers mounted a large demonstration demanding health insurance, a voice in the executive branch of government, tariffs on American agricultural imports and an end to corruption in local farmer’s association elections. Students joined in support, and the police responded with riot control procedures including the deployment of water cannon. It was a heady time to be involved with university students, to hear their stories and see the film on TV.

Seventy five members of parliament from the nationalist party (KMT) Chiang Kai-shek (until 1975) and then his son, Chiang Ching-kuo until his death earlier that year, asked for a declaration of  national emergency. It wasn’t done, but just the hint of return to the bad old days of repression cooled things quickly. The Farmers Association called off a second demonstration, scheduled for June 16. The government began taking action on some of the farmers’ issues, and academic organizations began conducting investigations.

Taiwan made it through. The police, out in force, were not, themselves, rioting (as are those in Hong Kong in 2019).

May Taiwan continue to show the way, for Hong Kong, for China, and for the world.